Malaga is characterized by balmy winters and hot, dry summers tempered by sea breezes, the annual average temperature of Malaga is 18ºC with an average of 2.900 hours of sun a year. In summer the temperature could go up to 44º, luckily there is a large beach to enjoy a refreshing dive into the Mediterranean sea.

Malaga, the gateway to the Costa del Sol and birthplace of Pablo Picasso, one of the most famous artists of the 20th century.

The elegant central zone of Malaga is largely pedestrianized with the focal and marble-paved Calle Marqués de Larios with fashionable stores on both sides and a luxurious coffee bar makes its most elegant thoroughfare.

Calle Larios leads into the Plaza de la Constitución, the city’s main square, with a monumental fountain and palm trees, brought to live with the terraces of numerous cafés and restaurants. Malaga centre has a number of interesting historical monuments, churches and museums, not to forget the birthplace of Picasso and the Museum of Picasso Malaga, housing an important collection of Picasso's works. 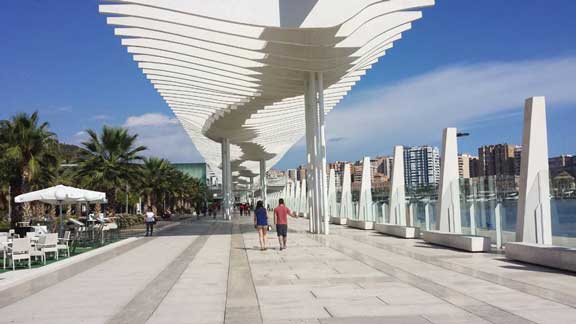 Perched on the hill Gibralfaro, above the centre of Malaga are the Alcazaba and Gibralfaro castle. At the foot of this hill you can visit the ruins of a Roman theatre.

Malaga is quite a busy city - its center is always filled with traffic, so driving through the center can be scary for some, especially with so many one-way streets. In case your not a good driver, or prefer to be shown around, it might be an idea to rent a car with driver at Malaga-Taxi, enquire about prices for day excursions.

The cost of a taxi from Malaga Airport to Malaga Capital start at €30.00. Request a specific quotation for a taxi from your location to Malaga capital.

Cost of a transfer from Malaga Airport to Malaga Center (Low season - Prices are subject to change):

Malaga, a place under the sun! Malaga is the capital of Malaga province, with a beach, airport, harbor, castle and historical centre.

Every year various events take place in Malaga, cultural, musical, and traditional events. Such as the Malaga film festival and the traditional Malaga fair.

Visit our page of events to find out more.

Later Malaka became part of the Roman Empire, of which you can still visit the Roman theatre and archeological sites in the centre of Malaga.

In the 8th century the Muslim-Arabs rule over Spain, and the city became an important trade center. Malaga is one of the Iberian cities where the Muslims persisted longest.

In the 19th century Malaga started to develop rapidly, and became with Barcelona one of the two most industrialized cities of Spain.

Malaga harbor was also the base of the Spanish Republican Navy during the Spanish civil war.